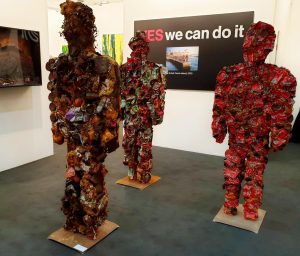 The fka – Freundeskreis Asyl Karlsruhe has been active in counselling and supporting refugees for over 30 years. In addition, we had two events last year with the Karlsruhe photographer Christian Ernst, because, with art, we can support objectives in refugee work. The idea of expanding and supplementing our sphere of activity through projects in the artistic-cultural field also led to the cooperation with the action and object artist HA Schult.

Under the premise that “only art moves the times”, Schult has been an active contributor to the international art landscape since the 1960s, with the theme of the environment always occupying a special position. HA Schult’s best-known works can be described as the so-called “Trash People” – one thousand life-size, human-like sculptures made of rubbish. For more than two decades, they have been travelling around the world in twenty sea freight containers to be exhibited as symbols of our society and our lives – “like refugees of the consumer society” – in exposed places (including the Great Wall of China, the Red Square in Moscow, in the ice of the Arctic, in front of the pyramids of Giza).

An exhibition of fifty such rubbish sculptures is planned for 2020 on the Senegalese island of Gorée off the coast of Dakar. They will be new sculptures – fusions of European trash and the remains of a Senegalese hut. The presentation of this new kind of Trash People focuses on a practice that has been going on for years: the export of waste to the Global South.

HA Schult is using this year’s ART Karlsruhe (13-16 February 2020) to present his presentation entitled YES we can do it, which is planned for the middle of the year, and is giving the fka the opportunity, through a dedication, to also be present on site with his project House of Hope West-Africa: Trauma and Flight – Help is Necessary and Possible.

Although both projects were created independently of each other, they have parallels in their themes. Both Schult and fka deal with the repatriation or deportation of unwanted “things” from Europe/West to African countries. At HA Schult it is the rubbish, at House of Hope it is the people.

In accompanying HA Schult’s project, the fka sees the opportunity to draw attention to the problems of repatriation and deportation in a complementary and broadening way and at the same time to present the paths to healing and solutions that can be taken together.

Refugees are expelled from the country and, in accordance with the saying “out of sight, out of mind”, together with their problems and the difficulties of their country of origin, are removed from public visibility and marked as having little relevance for Europe. Like the exported rubbish, they are forgotten and no longer play a role in our lives. It is easy to ignore things outside the immediate sphere of vision and influence. In the process, it can be forgotten that everything on our earth is interconnected. No human being can escape this.

At the same time, a lot is happening in the overall responsible effort and intercontinental dialogue. For several years now, the Federal Government has set up a large returnee programme called “Perspektive Heimat”. The basis for this is formed by counselling centres in which returnees are provided with professional support (start-up qualifications) as well as funds for small business start-ups with the aim of successful re-integration.

The House of Hope in Dakar, founded by the fka, is one of these centres. We would like to take this opportunity to express our sincere gratitude to the German government for granting the project, through which it devotes special attention to the core aspect of individual, psychological strengthening and makes a transfer of knowledge in the treatment of trauma sequelae to locals concretely possible.

Finally, our warmest thanks go to HA Schult who, by accompanying his campaign, gives us the opportunity to reach a wider public and to move forward in the spirit of the title “Yes, we can, do it!”. 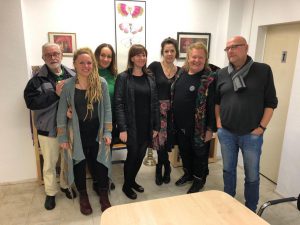 Back in November, it was a great pleasure for us to welcome HA Schult and his wife Anna Zlotovskaya to our premises at Marienstraße 63. The reason for the visit: to get to know each other and to exchange ideas about a theme that unites us – hope. For HA Schult, the leitmotif of one of his works: the sculpture called HOPE, which stands in front of the Bank für Sozialwirtschaft in Cologne. One of its three screens shows the portrait of a person who has not given up hope every day of the year.

The theme of hope always plays a role in the work of the fka. In Dakar, Senegal, we opened the House of Hope last year. It is a place that gives returnees the opportunity to come to terms with their traumatic experiences of flight and where they receive support in reintegrating into their society of origin.