On queerness, feminism and migration

Every year, May 17th marks the International Day Against Homophobia, Transphobia and Biphobia, abbreviated IDAHOBIT. It is a day of increased visibility which not calls to reflect upon the struggles many queer individuals have had to face on the road to full equality, but also to celebrate the diversity within the queer community and call for action to dismantle discriminatory practices and laws. Two weeks later, many in the queer community begin celebrating Pride Month of June, spearheaded in Germany by the various Christopher Street Days. On the eve of these occasions, fka staff member Amy decided to inject some queerness into this newsletter’s discussion on feminism! 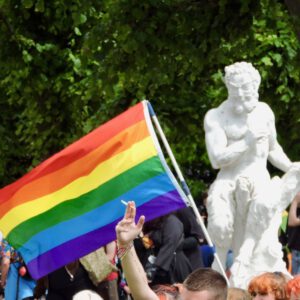 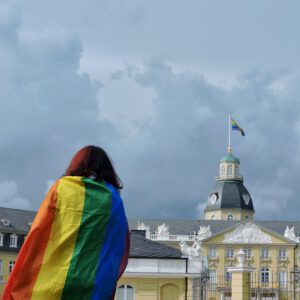 To me, feminism cannot be separated from queerness, not only because I personally identify as a queer woman, but also because my definition of feminism is based on the view that dismantling patriarchal structures in society is reliant upon challenging norms regarding gender identity, expression and sexuality.

It was only four years ago in 2017 that same-sex marriage was legalized in Germany. A year later, it became possible for intersex individuals to select a third sex option – “diverse” – besides “male” or “female” for birth certificates identifying documents. However, this third option is only available for intersex individuals who provide authorities with a medical certificate of being intersex, a practice that excludes non-binary individuals from having their identities legally recognized. Just this month, the rights of transgender individuals in Germany were once hotly against debated and calls to eliminate the discriminatory Transsexuellengesetz (“Transsexual law”) are growing. This law, in effect since 1980, initially required transgender individuals to undergo sterilization in order to change their legal gender, and today, it still requires transgender individuals to undergo a drawn-out, medically-based invasive process that pathologizes their gender identity. A draft proposal to replace the Transsexuellengesetz with a Selbstbestimmungsgesetz (“self-determination law”) that would ease the access to a change of legal gender was met with negative votes from a majority of the members of the German parliament, just two days after many of the same members of parliament waved rainbow flags for IDAHOBIT. There is still so much work to be done, even in times of greater visibility. 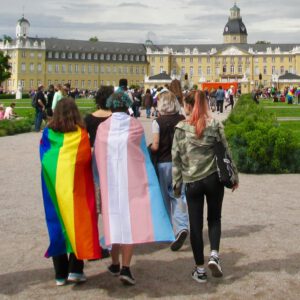 Despite all the progress that has been made towards both the queer and feminist cause, we are also bearing witness to the phenomenon of reactionary sexism and homophobia. On paper, “equality” is enshrined in anti-discrimination laws, and visibility of non-normative gender expression and sexuality is at an all-time high. Seemingly suddenly, the straight, white man is being called out for his behavior and his ignorance. This confrontation leaves him feeling a host of negative emotions, but at the same time, all his life it’s been ingrained in him that to show feelings and vulnerability is weakness, and weakness is female. One “acceptable” emotion is anger, which is now directed at the socially progressing world robbing him of his manliness! After all, if you define manliness as fighting off that which has been associated with women and femininity, all celebrations of femininity present themselves as a threat. Therefore, I believe that feminism cannot ignore the fact that patriarchal structures also harm men.

On the other end of the spectrum, we see so-called “trans-exclusive radical feminism”, which rejects the assertion that transgender women are women, thereby excluding them from women’s spaces and advocating for a narrow understanding of womanhood. This discourse leaves many trans women fearful of using women’s restrooms, as one argument made by trans-exclusive radical feminists is that allowing cis-men to self-identify as women and enter women’s spaces will lead to an increase in sexual predators assaulting “real” women in said spaces. To that I say: if your concern with trans women being included in women’s spaces is that cis-men might claim to self-identify as trans in order to gain access to said spaces and assault them, then your problem is actually with predatory men and not with trans women. Feminism is the right of all women – including trans women – to live without fear and to be able to choose what they want to do with their lives.

On that note, within the German context, the word patriarchy is often reserved for debates on migration when talking about the so-called “oppressive cultures” – Frauenfeindliche Kulturen – of migrants and refugees. Even sexuality and gender identity are employed – selectively in contradictory ways – to justify the heightened xenophobia and regulation of migration taking place in the name of protecting “tolerant” Germany from the homophobia/transphobic, intolerant, racialized Other. This strategy aligns itself with neocolonialist assumptions founded on Western missionary discourses. Yet the empowerment of migrants and refugees – women as well as men – in German society cannot truly be called empowerment if it is guided by a white savior complex.

At this year’s Christopher Street Day in Karlsruhe, held on June 5th, thousands of people took part in a show of pride and support. Several people active in queer organizations as well as queer fractions of the major political parties held speeches advocating for queer rights and acceptance in society. Yet only a few called for those present to reflect upon how we members of the queer community need to check our privilege and not reinforce harmful prejudices, racism, sexism, transmisogyny, ableism, classism, religious intolerance, etc. Furthermore, gatekeeping and rejecting people for not being queer “enough”, being queer in the “wrong” way or not conforming to neat labels and binaries benefits no one in our community. Queer, feminist perspectives can offer us so much in reflecting on our past, moving forward and dismantling oppressive structures.

Please check out the Bibliothek section of this newsletter to find a list of recommended reading on feminist and queer topics, and Happy Pride!