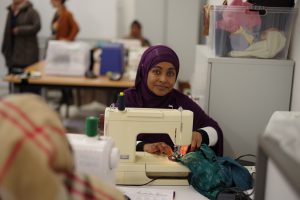 In 2018, the fka again offered a sewing workshop for course participants in its course room in Karlsruhe’s Südstadt district as part of the MiA courses. It forms the basis for the project “Open sewing café – creating something new together” – funded by the Heidehof Foundation. Since 2020, we have also been offering a sewing café in the fka office Südpfalz, which is funded by the sponsorship programme “Menschen-Stärken-Menschen”.

With low-threshold sewing rooms and cafés, the fka wants to offer women with and without a migration background an open space to meet and exchange. The aim is to open up a very special, lively space for joint creation. The participants, the majority of whom are migrants, are given the opportunity to contribute and develop their skills through sewing. They are encouraged to trust their abilities and to experience them as self-effective and self-confident. They are a real, integral part of the society in which they live and work.

The low-threshold access and the different language levels (first language learners and German learners) also give participants the opportunity to develop their language skills.

To enable interested mothers to participate, two women have been employed part-time as child supervisors since the end of 2019 with funds from GlücksSpirale. No further funding has flowed into the childcare funded by the Glücksspirale.

Since March 2021, the sewing café has been located in spacious rooms at Kronenplatz right next to the Weltladen Karlsruhe.

Women interested in the sewing café have the opportunity to come to the new rooms at Kronenplatz several times a week. Together, small projects are made and sewing is learned. Those who have more experience will also have the chance to implement their own creative projects, repair clothes or “upcycle” old things.

Everyone is welcome who is interested in sewing together, no matter if you are a beginner or an advanced sewer.